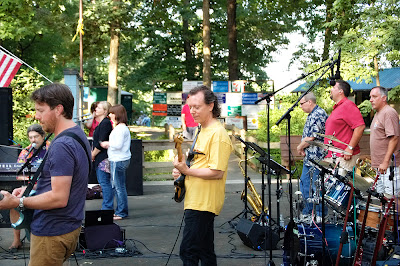 June was a busy month. Yes, crazy busy. But I ask you, how lucky can you get, to be playing so many different kinds of music, with such great musicians, and actually get paid for it? I am very fortunate indeed. And busy is a relative term. I am friends with some great local musicians whose gig schedules make me look like a slacker. So I am dedicating this blog post to Dave DeMarco, Bryan Ewald, Dale Coleman, Ellis Woodward and all the rest of the fantastic musicians around here who work very hard to bring you great music every single month. And so without further adieu, click "read more" to see how my month went down.


So, here's a recap of my June - there were:
8 solo acoustic gigs,
4 wedding gigs on solo classical guitar;
a public solo classical performance at a local library;
4 shows with Hectic Red;
a first time gig with a band, the Classic hit Men, that had itself never played live before;
2 shows with Technicolor Motor Home, the Steely Dan tribute band;
and my traditional 3rd Thursday at the Still with Brian Comotto;

With such a variety of gigs, I was constantly practicing to make sure I was prepared and in the zone of each gig as it came up. Upside: with all that practice and performing,  I ended up feeling more confident than ever with my classical chops, which is by far the most difficult to just sit down and pull out of the hat. Also, the Steely Dan repertoire is completely under my belt now, so I am able to relax and enjoy myself more on the TMH gigs. 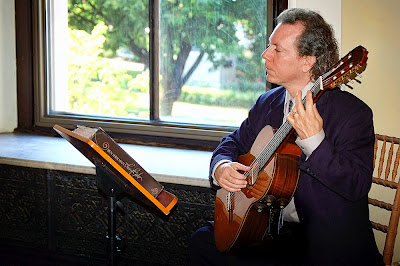 Keeping ahead of the itinerary was critical. Twenty one shows, every one in a different location. Four days were doubles. One day had me playing back to back sets with Hectic Red and Technicolor Motor Home at the same outdoor festival. Another day started with classical guitar at a wedding in Arlington, VA, then directly to Parkville MD to play with Hectic Red at the Barn. Many evenings were spent scrutinizing Google Maps.

In the midst of all that, I finally got a replacement for the beloved gig wagon that was totaled when I was in a car accident back in February.  A good friend who runs a used car lot in Glen Burnie kept an eye out for me and finally came up with a 2002 Dodge Caravan in beautiful condition. We took possession on June 8, and just in the nick of time, because our other vehicle (an old Honda Accord sedan) had brake trouble and busted air conditioning. So we were back in business and drove to the rest of the month's gigs in comfort we have not known for a long time.

Also in the "grateful-for" department: no equipment failures. Indeed, some if my practice time was spent refining and re-working my electric guitar tones (for the zillionth time). I was going to be playing a lot more electric guitar than usual this month, and there were some things I felt needed serious tweaking. I use a Johnson Millenium programmable amp, and it was very responsive to my new ideas, and I ended up more pleased and comfortable with my electric sounds than I have been for quite a while. Which makes me play better! 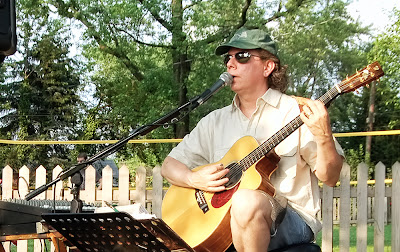 Also, in the midst of this crazy month, Crystal and I celebrated our 3rd wedding anniversary. Needless to say, being married to Crystal is at the top of my "grateful-for" list. (Note: as I write this line, Pandora Radio decided to play the song Crystal and I had playing at the beginning of our wedding - Moody Blues, "Are You Sitting Comfortably." Thank you, Universe.) 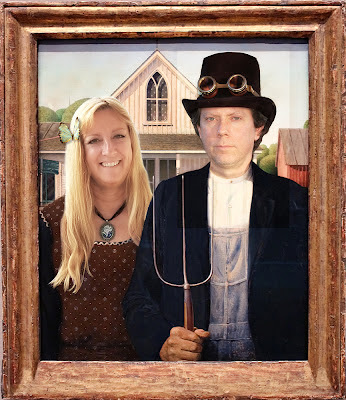 Anyway we celebrated by taking one of the few nights not booked and going out to see Lindsey Buckingham, famed guitarist from Fleetwood Mac, do a solo show at Baltimore Soundstage. (Pandora just played Fleetwood Mac's "Monday Morning" featuring Lindsey.) He gave a fantastic performance. 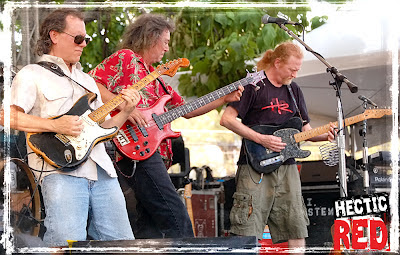 Hectic Red officially went public with the news that our 25th anniversary concert bash has been scheduled for Oct. 13 at the Recher Theatre. We are thrilled to be celebrating this milestone by rocking out more than ever.

Being in Technicolor Motor Home, the Steely Dan tribute band, has brought opportunities to play some wonderful venues I've never been to before. One unexpected gem was a show we played at the Lurman Woodland Theatre in Catonsville. 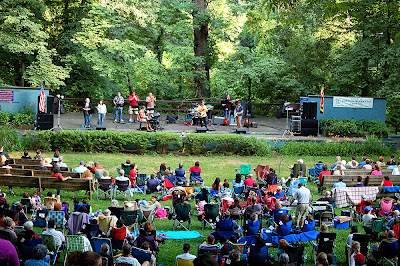 It's a natural amphitheater in a beautiful secluded woods, just a mile off the main drag of this Baltimore suburb. The weather was gorgeous, the sound was perfect, and there was an amazing magical vibe about the whole event.

One gig that came out of the blue happened when Colleen Carew from 100.7 the Bay contacted me and asked me to get in touch with Harvey Kojan, the station's program director. It turns out that Harvey is quite a good keyboard player, and was putting a band together for an event that the station was putting on. It was only two-and-a-half weeks away but they needed a guitar player. I agreed to get on board because the list included a bunch of classic rock tunes I knew, or had at least heard a lot, so I figured I could easily get into the right zone. It turned out to be quite a pleasure because I got to play some cool tunes like "Aqualung," "Low Spark of High Heeled Boys," and a bunch of other classic rock songs with great keyboard parts. Plus I got to show off on some guitar classics like "Black Magic Woman" and "White Room." 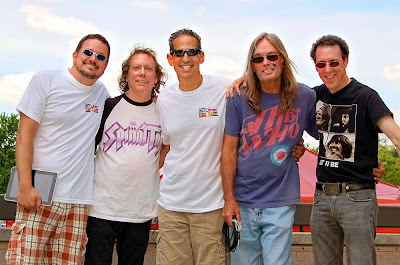 Harvey and his band, dubbed the Classic Hit Men, nailed it (a highlight was Harvey totally slamming on the keyboard solo on "Hush" by Deep Purple), and we had a blast. There is nothing like the feeling of a first-time gig that goes really well.

And so, on we go. July includes gigs with the only people I didn't work with in June: an electric gig with the Dave DeMarco Band on July 8, and an acoustic duo with Elena Martin on July 21. Plus on July 20, a rare chance for me to play an acoustic set with the great Viki Childs on vocals. There's also the usual line-up of solo gigs, and Hectic Red wraps it up with a show at McAvoy's. Life is indeed very good!

Photos and digital imaging by Crystal.