On September 19, 2010, Baltimore MD hosted a tremendous event to pay tribute to musical legend Frank Zappa. A monument was dedicated, a bust unveiled, Frank's widow Gail gave a talk, and son Dweezil brought the Zappa Plays Zappa tribute band, a top notch assembly of excellent young musicians, to play an incredible set of Zappa music. Several thousand people filled the streets of Highlandtown for a celebration of all things Frank.

Crystal and I were there; for a detailed account of our experience, including a bunch of her usual superb photography, visit her Painting Queen blog. 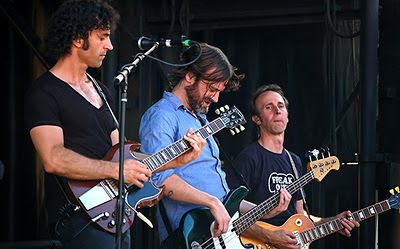 It was uplifting and inspiring to see such a huge turnout. I feel like everyone knew that they were not just there to hear some cool music, or recall their favorite bawdy Zappa lyrics. Zappa's musical career was intertwined with a lifelong commitment to freedom of expression, not just for himself, but for all people. He was unflinching and uncompromising in his dedication to first amendment rights. Zappa's musical career was one of total integrity, to the very end. You can't enjoy his music and not get a glimmer of that. 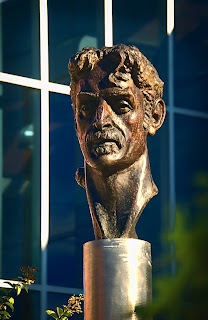 The serious fan of Zappa also knows that he had boundless creative energy and an astounding work ethic. His official discography lists a whopping 90 albums! This includes 62 albums released in his lifetime, plus a growing number of posthumous releases. This vast quantity also reflects his insatiable curiosity about the recording process itself. He became well known as someone who pushed  technology to the limits in pursuit of the highest quality sound and most innovative productions.

Frank left a vast archive of live and studio recordings. His son Dweezil has taken on the job of converting this wealth of material to digital form; here's a link to an excellent article about that. The point is, Frank wasn't just spouting platitudes and getting away with foul language. He was constantly developing and expanding his creative ideas, and manifesting them into the best possible recorded form as fast and as often as he possibly could.

And then there's the fact that he was most certainly a musical genius. How else can one explain the fact that by the time he graduated high school he had taught himself about contemporary avante-garde classical music and was composing, arranging and conducting pieces for his own high school's orchestra?
Here he is at age 22 on the Steve Allen show (the video is in four short parts; it is well worth it to watch the whole sequence):


Frank gained the respect and appreciation of musicians everywhere for the sophistication of his compositions and his amazing stylistic range. The music he wrote was so challenging it could only be played by highly trained, educated musicians with top notch technical skills. He was known for pushing them to their limits and beyond.

Here's Steve Vai telling what it was like to audition for Frank:

Frank was renowned as a guitar player with prodigious skills and an utterly unique style. Again, self-taught, he didn't even pick it up until he was 18, after he had already been a drummer and composer for four years. He approached guitar with the same attitude of pushing the limits of what he could do, and also of the sounds the guitar could make. Here's a link to a survey of Frank's guitars and the extensive modifications he made to them.

In the 1980's, Congress was considering legislation to put labels on records warning of possibly objectionable content. This of course pushed Frank's buttons because to him it was a clear cut infringement of free speech, and even worse, it was phony. It was a distraction, meant to divert people's attention from other legislation being pushed through that would benefit the big record companies. So Frank came and testified before Congress, fully armed with his usual wit, intelligence and blistering sarcasm. Here's a clip:

He also appeared on a number of talk shows to promote his views, and always showed great intelligence and consideration, as well as a clear disdain for those who would pretend virtuousness as they pursued their own self-serving agendas. 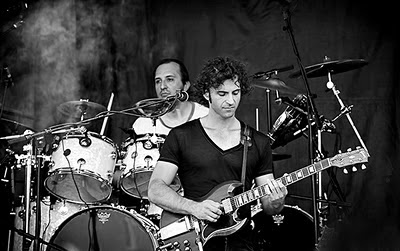 For me, Zappa has always held a special place as as someone who could rock hard, groove deeply, jam intensely, create insanely complex musical structures, and be a funny sarcastic smart-ass, often all in the same song. It's hard to imagine that as normal, but there it was, displayed in song after song, album after album. Apostrophe

Without doubt, Frank seemed to achieve three or four lifetime's worth of accomplishments in his 53 years. But now my thoughts turn with much appreciation to his son Dweezil. The Dweez has spent a considerable part of his life devoting himself to understanding and promoting Frank's work, to the extent of taking a year just to prepare to play guitar in the Zappa Plays Zappa tribute band. Dweezil is obviously a man with considerable intelligence, talent and will. Having seen him play live, I also think he has a lot of heart and soul. I am looking forward with great anticipation to discover what the future holds for him, beyond Frank.

Check out my other blog post about FZ, as I venture into my extensive magazine collection for a survey of articles about and by Frank: http://bensguitarwisdom.blogspot.com/2010/10/more-zappa.html

And here's a few more references on FZ:
Last word goes to the man himself -
rare live video of "I'm The Slime" on Saturday Night Live, 1976: