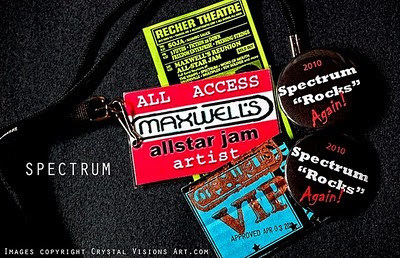 On April 3 2010 we had a spectacular reunion of my very first band, Spectrum (well there was one earlier band, but it was too short lived to mention) (OK, it was called Future Shock). We were invited to reunite as part of a big multi-band event being developed to celebrate the golden years of a legendary Baltimore rock nightclub called Maxwell's. The Spectrum people had already been meeting up socially and talking about playing together, and this event gave us a ready made reason to do it.

It was to be held at the Recher Theatre in Towson MD, a terrific venue with a 700 person capacity, a great stage and very high quality sound and lights. We rehearsed several times before the show, and it was great to see how good everyone was still playing, since, unlike me, most of the members had not been actively playing much since our last show in 1985. We quickly and easily gelled as a group again. 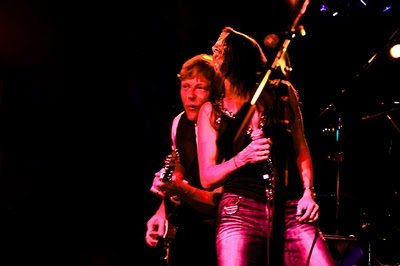 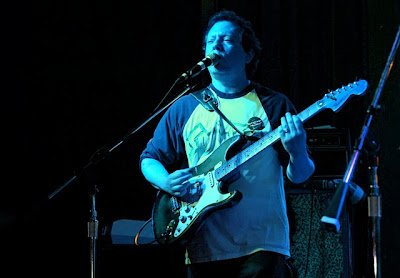 It was also amazing to discover how many fans were still around who remembered us. We started a Facebook page and quickly amassed over 400 friends. That helped the show turn into an advance sell-out.

That night, our set was scheduled at about two hours into the event. The energy in the room was at its peak and the enthusiasm coming from the crowd was amazing. It fired us up, and we played with all the power, precision and flair that we used to have. It was more than just re-living the glory days; we were still really doing it. 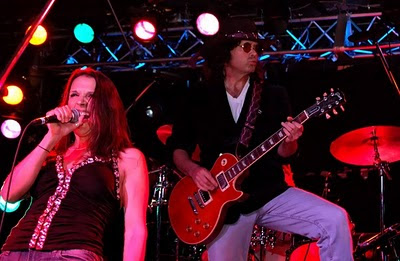 Back in 1975, we were all in 10th or 11th grade at South Carroll High School together. All of us who became part of Spectrum were crazy about rock and roll music. Once the group started, we were totally committed to being the best possible band we could be. And yes, we were all a little bit out in left field, shall we say, but that was probably an essential part of why we bonded together so tightly. 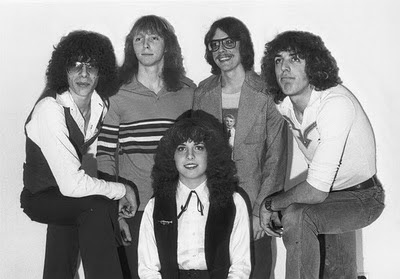 Spectrum existed in a time, the late 1970's - early 1980's, that was unique in the history of the Maryland area's local music scene. Just about every high school in Maryland had live bands for dances on a regular basis. There were also teen centers, and teen dances at Fire Halls and rec centers all over the region where bands could play. As high school kids, we went to see bands, and it got us excited and motivated. This is how Spectrum got started, as fans of live music. 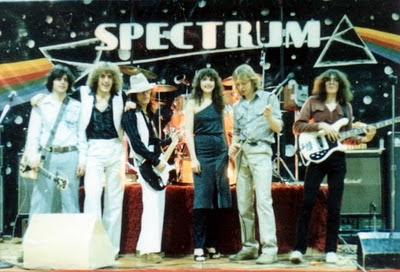 We worked very hard to be as good as the best bands we loved to go see. We raised ourselves up to the highest levels of musicianship, professionalism, showmanship and production. We were very successful, and we had more fun than you can imagine, and we became best friends. Then we made the transition to nightclubs, and that scene was also vibrant and exciting for local bands at the time. There were big clubs everywhere, and they were all doing well. It could have had something to do with the fact that the minimum drinking age at the time was only 18! There was a huge number of young people going out to party and hear live bands, all the time. 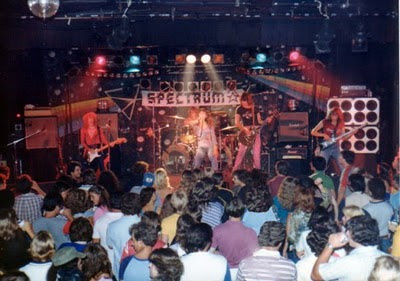 We were them, and we played for them. We had the time of our lives, and we did it as long as we could, until many factors conspired to bring it to an end. The problems included raising the minimum drinking age to 21 (a good idea in retrospect), the introduction of Karaoke and DJ's into nightclubs, the rise of punk and New Wave synth-based music, financial mis-management, an economic downturn, personnel changes - it all became too much to cope with. But we all came out of it with the knowledge that we had gone through an amazing experience shared by a very few lucky people. 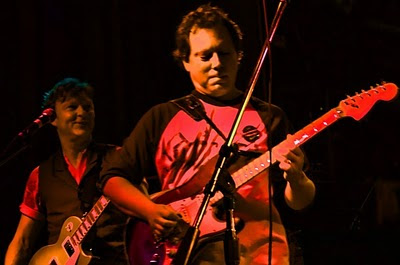 After our set at the Recher Theatre, we basked in the glow of overwhelming enthusiasm and appreciation from the many friends and fans, many not seen for 25 years, who came back to see us again. I think it's safe to say you'll be hearing more from Spectrum. Keep up with the band on their Facebook page.
For more great pics of the band from back in the day, check out this photo album.
Check out photos from the reunion in this photo album - pictures and digital artistic magic by Crystal.
Please read Crystal's blog on the Spectrum Reunion, "Spectrum Rocks Again." from her wonderful blog, The Painting Queen.
Posted by Ben Sherman at 11:01 PM