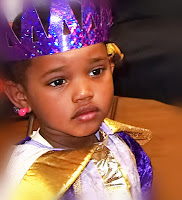 I was delighted to be asked, for the third year in a row, to play a series of classical shows for kids at various branches of the Enoch Pratt Library system in Baltimore. There is an over-arching fairy tale theme for all the events, and the kids, mostly ages 3 to 6, are encouraged to wear costumes. The library staff plans various activities, story time and snacks. Sometimes the music is the center of attention, other times it's just in the background, but I always feel good about being there.

This year I was asked to provide a trio, so I called my good friend and bassist extraordinaire Jay Dulaney, and he suggested violin virtuoso Lucas Lechowski. All were available and happy to do it, so off we went. I set up a roughly one hour program of fairly easy, kid-friendly classical tunes and sent the sheet music out to the other guys a month or so in advance of the first show. Last year, Jay and I had done this same series as a duo, so we were already familiar with how it would go. Lucas was new to this program, so he was starting from scratch, but he was confident and ready to take it on, and that was good enough for me. Having seen him sit in with a jazz group at a show recently, I already knew he was a first-class, highly accomplished violinist.

As is often the case with busy musicians in the Baltimore area, we did not rehearse together in advance. I have been very privileged to be a part of a community of extremely proficient musicians; I have gotten quite accustomed to simply trusting their talent and professionalism, and going with minimal preparation, and I have never been let down. So it was on this gig. I met Lucas for the first time about an hour before the first performance at the Herring Run Branch library on Erdman Avenue. Jay, Lucas and I spent the pre-show time in the foyer of the library, chatting and hanging out. When the time came, we got up and played our program like we'd been doing it forever. 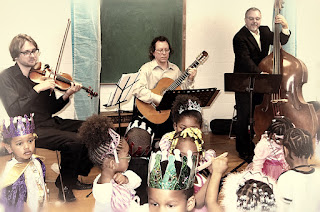 One must be prepared for the unexpected on this gig, and I was very grateful that Jay and Lucas were generous and open-minded enough to go with the flow. We played a total of four different libraries during two weeks in April. Each one was quite different. There was always a large group of kids, at least 50 or more at each event. In some cases the kids' time was highly structured with planned activities; other times not at all. Sometimes we had a lot of breaks, other times we played constantly the whole time. Sometimes the kids were rowdy and excited, sometimes very quiet and polite. Sometimes we played accompaniment as they sang popular kids songs. Sometimes they danced. Sometimes we did question-and-answer time. Sometimes the kids knew a lot about playing an instrument, sometimes it was something brand new to them. Sometimes they had a million questions and wanted to touch our instruments. Sometimes we let them!

I take it as an honor and privilege to be allowed to share music with kids this young, for what may be the first time many of them have ever seen someone playing live. I know how much I loved hearing and watching live music when I was a kid. Now hopefully I can be the spark that lights that fire in the hearts of another generation.

Thanks to Petra Compel and all the folks at Feats Inc. for organizing the shows again this year. Feats is a great event planning company, and Petra is the best of the best. 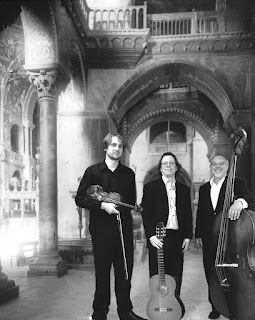 And thanks again to Jay and Lucas, two superb musicians and great guys.
I look forward to more opportunities to play with you.