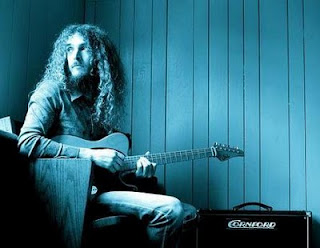 One day after seeing Frank Vignola (see my previous blog post), I had my head further blown off by see Guthrie Govan in concert with his new band, the Aristocrats. I first heard of him a few years ago at the NAMM show in Anaheim CA; Guthrie was there as an endorser of Cornford amplifiers and Suhr guitars. He did a full concert one night at a nearby venue, and left all who attended with jaws hanging down to the floor. He and his group played a set of instrumental rock that could only be called astonishing. Yes, it was loud, it was high energy, and yes, it was shredding...But it was evident to all that Guthrie is so much more than just another shred-meister.

First of all, he has incredible tone. Whether playing clean jazzy phrases, hot country licks or high-overdrive solos, his tone is sweet, full and clear as a bell. His technique is stunningly quick and yet razor sharp in accuracy; clarity is again his aim. His fretboard knowledge is so complete, and his understanding of musical styles so vast, that he can literally execute any idea in his head. But it is the content and character of his musical ideas that elevate him above so many others in this new era of super-technical players. 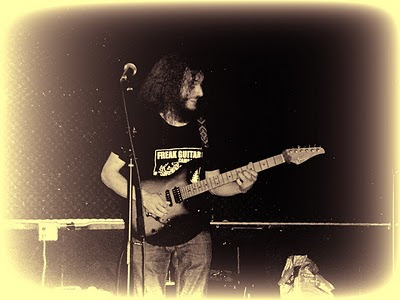 When a musician reaches the level of Guthrie Govan, the technical issues of playing well are not really a factor anymore. The priority returns to the fundamental one - that of authentically expressing yourself, through your instrument.  Guthrie's playing communicates intelligence, eclectic tastes, curiosity, wit and humor, passion and exuberance. The un-matched virtuosity that he possesses is not the end-all of why he is playing music. It is because he is passionate about conveying what he loves about music on the guitar.

For a several years now, word of his talent has spread via You Tube. He has landed some cool hired gun gigs and lots of teaching opportunities. Make no mistake, Guthrie is a great teacher. There are plenty of videos of him giving clinics, and he is very insightful and enjoyable. I followed him for a couple years in the pages of Guitar Techniques, a British magazine that he contributed many lessons and recordings to. 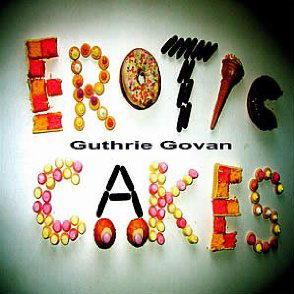 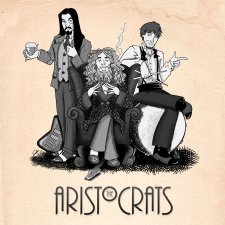 The Aristocrats is it, and it is just right. Joining with bassist Bryan Beller and drummer Marco Minnemann, both hugely talented musicians with incredible resumes, Guthrie is now in a band of equals, in which all are masters of a huge range of styles. Their website describes it as "a melting pot of their respective influences, ranging from jazz-rock fusion like Return To Forever and Mahavishnu Orchestra, to the progressive rock of King Crimson and UK, to guitar heroes like Steve Vai and Joe Satriani, to the absurdly complex and satirical music of Frank Zappa and Mike Keneally, and even to ’90s groove metal like Rage Against The Machine." 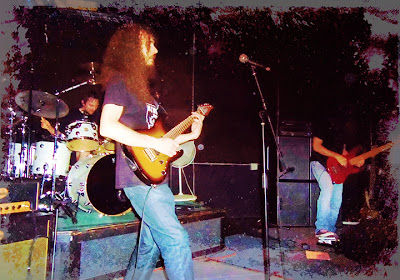 I got to see them when they came to Orion Studios in Baltimore. Orion is dedicated to presenting progressive rock and otherwise un-categorizable acts. They have a small venue with a nice stage and good acoustics, and it was a great chance to see this band up close. The sound was huge, intense and powerful, but crystal clear and full of detail. There was stunning individual virtuosity and near telepathic interplay, as their website says. It was a real privilege to see musicians of such immense talent, seizing the opportunity to push themselves to their limits, achieving moments of sheer brilliance, and creating something together that is greater than the sum of the parts. Let's hope there is a live album and/or DVD in their future. 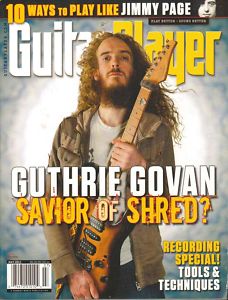 Their album's release has been highly anticipated, and helped bring Guthrie to the cover of the July 2011 issue of Guitar Player magazine. It's a great article, even though it's just a small glimpse into the mind of Guthrie. Like his music, he is witty, smart, broad-minded. He is indeed a great teacher and has a lot of wisdom to impart. Hopefully this will lead to further recognition and success. No one has ever deserved it more.

Check out Guthrie's page on the Cornford Records site, and read what people like Joe Satriani, Dweezil Zappa, Lyle Workman, Reb Beach, Brett Garsed and others have to say about him:
http://www.cornfordrecords.com/

Here's a clip of "Fives," one of my favorite Guthrie tunes:

concert pics by Ben and Crystal