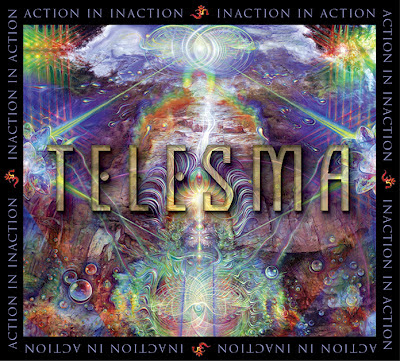 When trying to describe Telesma, you quickly find yourself coming up with so many different qualities that one can scarcely imagine all of them applying to the same group. Yet after hearing them you have to concede that yes, they are indeed a tribal-techno-psychedelic-trans-cultural rock band. And their new album Action In Inaction perfectly captures the magic of a band whose music is spiritually uplifting, emotionally moving, intellectually stimulating, infectiously rhythmic and hard rocking - all at once.

Telesma has been pursuing and developing this multi-layered, multi-dimensional approach together since 2002, with core members Ian Hesford and Jason Sage eventually joined by Chris Mandra, Joanne Juskus, Bryan Jones and a stable of amazing drummers. When I first saw them in 2009 they had already done a lot of shows, produced a CD (O[h]m) and a live DVD (Hearing Visions) and had collaborated with legendary visionary artist Alex Grey. Their performance was full of fiery intensity and self-assurance as they effortlessly crafted their magical musical fusion. I wrote about it in a blog post back then; you can click here to read it; for Crystal's first impressions, click here. 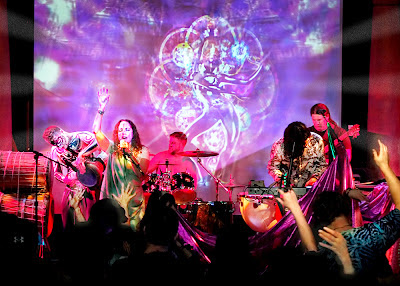 I have seen them several times since then, and my appreciation for what they do has only grown deeper. When I heard the new CD I was delighted to find that everything I have come to know and love about this band and their music is clearly in evidence. The production is outstanding, and the performances are brilliant. But they have gone further, creating a superb album of music that makes a profound musical statement.

The album begins with a Hindu mantra, beautifully sung by Joanne. With the sounds of breathing, ringing bowls and natural elements like wind, fire and water in the background, the effect is to calm and clear the mind, and to consecrate the "space" of the album - a declaration of sacred intention. It affirms from the outset a strong spiritual basis for their work. Their lyrics show an affinity for the wisdom of Eastern religious traditions such as Hinduism and Buddhism, but the band itself is not propagating a religious point of view, nor do they all even share one. They call on Eastern traditions because they most closely align with what Telesma is trying to convey - the struggle, interplay and balance between the material world and the spiritual. Their music expresses a quest for transcendence, and at the same time an embrace of all that it means to be human. 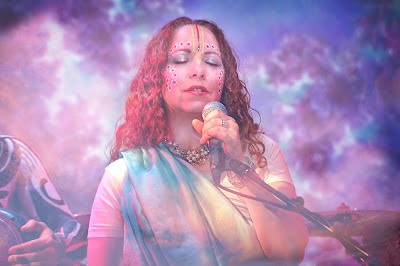 This interplay is perfectly exemplified when, as Joanne is still intoning the last syllable of the chant, Jonesy tears into the high-energy funky bass line that opens track 2, "Shivananda." The band kicks in a moment later and we are treated to the full Telesma experience in one gulp - driving rhythms that demand your physical involvement, huge choruses of wordless vocals sung in beautiful harmonies that stir your emotions, and guitar playing by Chris that veers effortlessly from peppy modal melodies to blazing guitar solos that soar and wail. Eventually Joanne returns with the words of the chant, but now the melody is re-cast to fit the groove. This is Telesma, reaching for the spiritual while reveling in the physical, and inviting their audience to join with them in the experience. As they pursue this in song after song, you realize that something truly new is being created; a genuine paradigm shift is taking place. 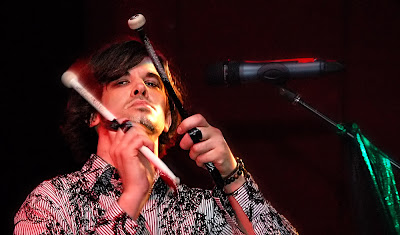 The songs on the album always have layers of sounds, layers of musical themes, and layers of meaning, all coming together to make a powerful statement. A perfect example of this is "Ascension," in which every aspect of the composition, arrangement and performance completely supports the feeling of yearning to ascend beyond the transitory nature of earthly experience. But the band is not afraid to explore the shadow side of the human soul, as in songs like "Chain," in which the lyrics call us to confront the darker aspects of our selves. Chris uses a fretless guitar here to perfectly convey the sense of peering into the darkness.

Telesma has a distinct musical objective. As expressed by Ian in an interview,  the idea is "bringing the primordial and futuristic together, and coming full circle with the sounds of our collective human tribal past.” We hear that very clearly on "Groovinda," in which the instrumentation ranges from Ian using a humble mouth harp called a kubing, to Chris playing something called a mandrum, an electronic musical interface that...well, you just have to see it. Click here for a demo and watch the genius at work. 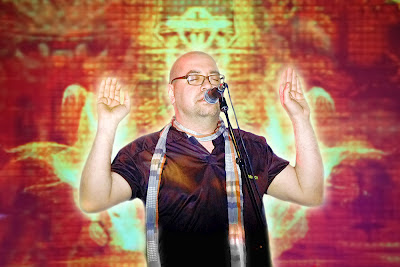 Chris plays guitar with a huge amount of energy, passion and a powerful sense of melody, and he is not afraid to create some chaos while employing modern technology in the most creative ways. Expect to see him supplementing his sound with guitar synth, fretless guitar, E-bow and a variety of effects pedals. On the other hand you may see him simply singing directly into his guitar's pickups and running that through a looping pedal. Either way it is Chris who sets the tone and drives the songs through their many moods, and carries them to incredible heights of intensity. 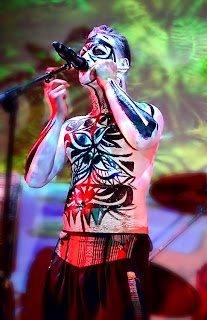 On the other hand, Ian is dedicated to exploring ancient traditions from many cultures, and letting them fuse with modern methods of music-making. During a typical show you will see him throat singing, playing didgeridoo, kubing, and percussion such as the African djun-djun and the middle-eastern dumbek. Click here to watch an amazing performance of Ian playing two didgeredoos and a dumbek all at once, on a street corner in Baltimore. To watch a time-lapse video of Ian getting his body painted, click here. This is a ritual for Ian at every show, and further evokes his desire to connect with "the primal part of the human spirit."

Throughout the album, every musician's presence is felt, but all contribute to the whole, whether it's the vulnerability and transcendent beauty that co-exist in Joanne's singing, Jonesy's virtuoso bass skills, Brandon Wildman and Rob Houck's  hugely powerful drumming, or the multi-talented Jason, who may be seen playing percussion, singing, and creating eerie sound-scapes with synthesizer or theremin. Every member is a top notch musician, but all have directed their musical talents to fulfilling the band's mission. 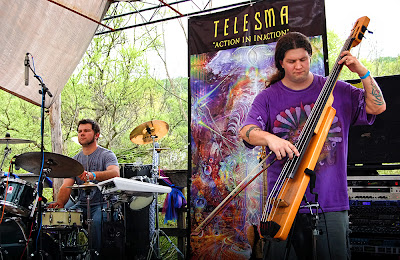 This is even more evident live, where you can witness this vastly diverse bunch of characters coming together and creating something utterly unique, infectious, powerful, meaningful and yes, fun! The impact of their live show cannot be emphasized enough. To fully "get" Telesma, you have to experience the powerful energy that is shared between the band and the audience when the band performs. When you make that connection, you are not just rocking out and dancing, but flying with the band through a landscape of imagination and spirit.

Buy their music at CDBaby.com and on I-Tunes

P.S. Ian is recovering from a heart attack he experienced just prior to the CD release. He is doing well, out of the hospital and making remarkably quick progress, but could definitely use your support in any way that you are able to give it. Click here to visit their website and find out more.