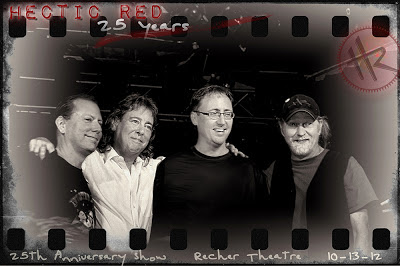 Can it really be? Has it really been that long? Well, yes: from 1987 to now is indeed 25 years. And thus it is true - Hectic Red, one of the finest classic rock bands ever to hit the stages of Maryland's music scene, has been together 25 years, with no personnel changes, just the same four guys the whole time - Dan Grim, Rich Filbert, John Suchy and me. I won't bother to attempt a comprehensive chronicle of how it all began, who we are, what we've accomplished - you can get all that on our website, www.hecticred.com. For now, after having delivered one of the best shows of our career at the Recher Theatre on Oct. 13, I am content to simply offer personal thoughts and reflections. Click "read more" and away we go.

For starters, go to  www.hecticred.com and click on the "Retro" page. 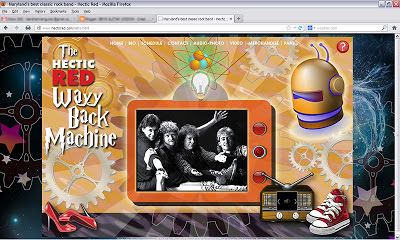 It's a great gallery of pics that take you back to our earliest times together. The obvious take-away: lots of hair, very little body fat.

Now go to the "Video" page and check out  the clip for "I've Seen All Good People" filmed at the Dulaney Inn in 1988. Check out Danny Grim playing acoustic guitar, bass guitar, foot pedals and singing the lead like nobody's business. (The video was shot by Crystal, but that's another story.) 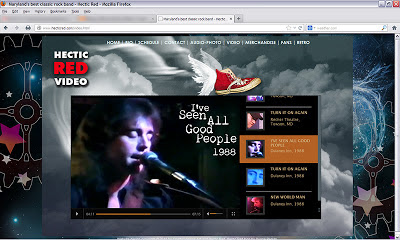 And by the way, the video page is the place where you can see all the videos that have been officially released by the band, gathered together on one convenient video player. (A few other videos from the late 80's-early 90's have recently resurfaced. They include some real gems from our early days; we hope to be sharing them soon. Also we had some pro video done of the 25th anniversary show, so hang in there for that too.)

I look back at the early days and I keep thinking, "what an amazing band I am in," over and over. We were damn good right from the start, and you can see from the old videos that we were having a ball and playing our butts off. And we had the rare good fortune of getting along well with each other and actually becoming very good friends. 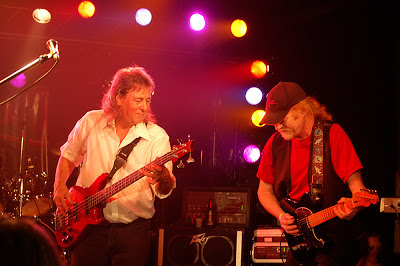 Fast forward to Oct. 13, 2012. Twenty five years have passed, and we are still playing great, and our friendships are as tight as ever. And I came off stage after the Recher show, still thinking, "what an amazing band I'm in."

When we started planning for our 25th anniversary concert at the Recher, we all agreed we needed to work up something new and special for the set list, to supplement the all-time favorites we knew the people would want to hear. We have some incredible fans who have also become great friends and have supported us for many years, and we wanted to give something back. The idea of doing a medley of songs by Yes rose to the top and we decided to go for it. It was a very ambitious thing to do but we obviously had some prior experience playing Yes, so we knew that if we planned it right, we could handle it.

The guys naturally rose to the challenge, and after many rehearsals and revisions, the medley came together. One of this band's many gifts is that everybody knows how to learn their parts thoroughly, play them well and listen to what the others are doing. We normally rehearse at very low volume levels; so quiet we can hear each other sing without microphones or PA. So we stand face to face and start working out vocal harmonies. As it was then, it still is now: Hectic Red knows how to do harmonies. Everybody knows how to find the best part to fit their vocal range, but also to adapt to what the others are doing so that we quickly end up with perfectly complementary parts.

I got more and more excited as we got closer to show date. The music of Yes, and guitarist Steve Howe, has always been hugely influential and inspirational for me. Now I was going to get a chance to play some of my favorite songs by them, with the one bunch of guys that could really pull it off. 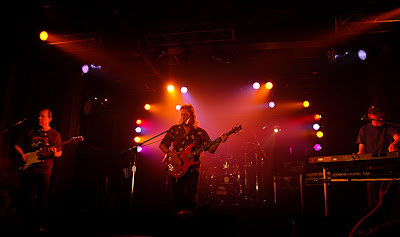 The Oct. 13 gig was a fantastic night all around. After 25 years, this band is still capable of getting up and delivering a stellar performance. People have come to expect a very high level of professionalism and top-notch musicianship from us; on top of that, it is obvious from our stage presence that we are still enjoying what we do immensely. All those elements were clearly in evidence at the show, but intensified in a big way by the amazing audience response. It was so great to see such a huge number of our fans, old and new all coming together. You could feel the positive vibes everywhere - the level of enthusiasm and appreciation coming from the audience was just off the charts. And I think it supercharged our performance, resulting in what many people told us was one of the best Hectic Red shows ever.

And the Yes medley...well I was absolutely thrilled, but you can decide for yourself. There are two clips available at the moment. The first one is from an audience cam, and includes a little thing we worked up to give everyone an unexpected laugh, which then led into the Yes medley.

I could go on for hours with Hectic Red memories and anecdotes. From time to time, maybe I will! But for now, I can only say how fortunate I have been to have the opportunity to play music that has been so personally gratifying; to be part of such a great group of musicians and to be able to count them as friends; and to have connected with so many friends and fans over the years. This band has touched a lot of lives, and made a lasting impact on music lovers far and wide. I am left feeling very humble and grateful, but also very proud!