Playing Music For The Kids 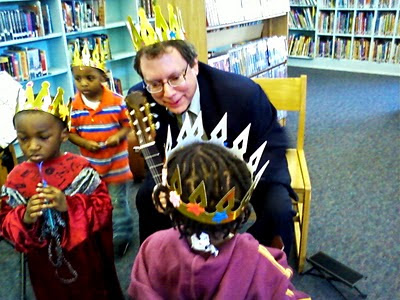 I was hired recently to play classical music for a children's program at a Baltimore City public library. It was part of a series the Enoch Pratt library is doing to give city pre-schoolers a chance to see and hear real musicians playing classical music. I was warned that the last event didn't go too well and the musicians, a string trio, were, shall we say, not well received. Nevertheless I was encouraged by the fact that some other musician friends of mine had done similar things, and I thought it was well worth the effort, even with the outcome less than certain. I could never have guessed how much fun it was going to turn out be. 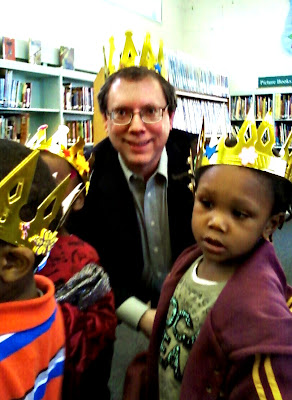 The staff at the Forest Park library were great. They obviously had plenty of experience managing kids. They had a prepared a fairy tale theme with costumes for the kids to wear, activities, and story time. Everybody made crowns for themselves, and I got one too. I got busy with my assignment: to provide music and entertain the kids while keeping it in a classical style. It didn't take long before a number of little boys and girls came closer and started looking at the guitar and the music. Some started asking questions: how did you learn how to do that? How do you know what those notes on the paper mean? 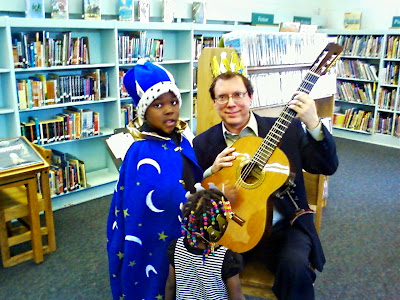 One guy wanted a little more. He was one of the oldest, maybe five or six years old. He watched me intently for several minutes before coming up and telling me that he'd been rocking out since he was three years old. I invited him to strum the strings while I formed chords with my left hand. He obviously had no experience at all, but nevertheless, in a few moments we were rocking out together. Eventually he moved over and tried to do the left hand, which he quickly found was much harder. 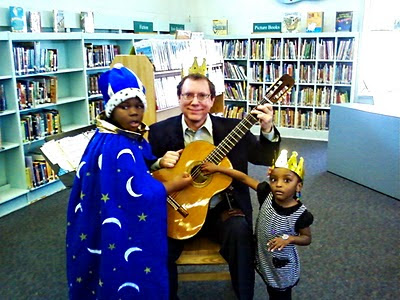 I was throwing in classical ditties in between encounters with the kids; it was all good. The point was obvious, one I have seen many times in my years of teaching guitar: you simply have to let kids know that there are possibilities, things that they can do too, if they want. The level of difficulty doesn't seem to matter. You simply show them that it is being done, and they will simply accept it as possible. Not all will achieve it, but some will, and they will do so more easily with the knowledge that they have already seen someone do it.
Thanks to Petra and PW Feats for providing this opportunity for me.

Be sure to read Painting Queen's blog entry about this very special gig!